When his wife, Edie, dies, Will Moran abandons all he used to be, and do, to paint still life canvases of rocks and driftwood on the walls of his house.

He’s never painted before, recognizes that his paintings are awkward and ugly, but returns each day to his struggles with light and shadow, color and object, boundary and perspective. He eavesdrops on neighbors, dips into garbage cans, and fills his home with rocks he collects from local beaches. Through it all, he clings to his still lifes, each another attempt to represent the simplest elements of his world — rocks, wood, and grief. 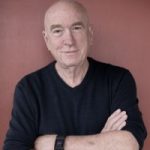 Paul Skenazy grew up in Chicago and studied at the University of Chicago and Stanford University. He taught literature and writing for thirty-five years at the University of California, Santa Cruz. His nonfiction works include a book on James M. Cain, a collection of essays on place in San Francisco literature, and a selection of interviews with Maxine Hong Kingston. He has published more than three hundred reviews of fiction and nonfiction for newspapers and magazines nationwide, and was twice nominated for the National Book Critics Circle award for reviewing. For a dozen years, he was a mystery review columnist for the Washington Post.

His short novel, Temper CA (2019), won the Miami University Press Novella Contest. He revised and edited La Mollie and the King of Tears (1996), a posthumous novel by Arturo Islas, and his autobiographical piece on Chicago and Saul Bellow was a “Notable” essay in The Best American Essays, 2015. His stories and essays have recently appeared in Catamaran Literary Reader, Chicago Quarterly Review, and elsewhere. He lives in Santa Cruz, California with his wife, the poet Farnaz Fatemi.