Shelby McDougall’s past is behind her. Almost.

It’s been five and a half years since Shelby put her infant twins up for adoption, and she’s finally on track. Back in Santa Cruz, California, she’s sharing an apartment with her brother, Dexter, and in her second year of criminal justice studies. She’s landed her dream job as an intern to local P.I. Kathleen Bennett. And her stone-cold love life is heating up.

Then a late-night phone call puts Shelby’s perfectly ordered life into a tailspin.

One of the twins has been kidnapped, snatched from home in the middle of the night. There are no witnesses — no clues, no trails to follow. After meeting the family, Shelby knows something is off. The adoptive parents tell her the children don’t sleep, they eat constantly, and their IQs are off the charts. Against her better judgment, Shelby agrees to help.

By the time she realizes she’s up against something powerful, something evil, it’s almost too late. As Shelby fights for her life, and that of the kidnapped child, she discovers shocking truths about herself and the children. 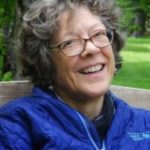 Nancy Wood grew up in various locations on the East Coast and now calls Central California home. Recently retired, she spent 35 years as a technical writer, translating engineer-speak into words and sentences. She likens it to translating ancient Greek — when you’re not too familiar with the Greek part.

Since retiring, she and her husband have been traveling the world. So far, they’ve visited France, Spain, England, Sri Lanka, New Zealand, Belgium, the Netherlands, India, and Vietnam. They are not anywhere close to done and have many more trips planned.

Nancy is also a passionate photographer, focusing on macro photography. She can be found at Nancy Wood Books.

Also Available From This Author