Haycorn Smith and the Castle Ghost

A boy is in danger when he stumbles upon a crime committed by two prominent men of his town, but finds an unusual ally in the form of a castle ghost.

Twelve-year-old Haycorn may know all about ghosts of Ohio, but even he is stunned when he and his friend Budge encounter a ghost in a castle.

The boys witness a clandestine meeting there between two men involving a kick-back scheme, putting their lives, and that of Haycorn’s mother, in jeopardy.

But the ghost may have other plans for all of them. 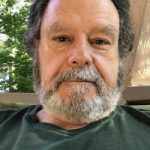 John Kachuba is the award-winning author of twelve books of fiction and non-fiction. His most recent work, Shapeshifters: A History, was a finalist in the Horror Writers Association’s Bram Stoker Award. John holds M.A. degrees in Creative Writing from Antioch University Midwest and Ohio University. He is a frequent speaker at conferences, universities, and libraries, and on podcasts, radio, and television. You can find out more about John on his website, johnkachuba.com.