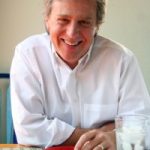 Wallace Baine began his career in daily journalism in October 1989. By the end of his first day’s overtime shift, he had contributed to the front-page story of the Gilroy Dispatch on the largest earthquake to strike Northern California in generations, trumpeted on the newspaper’s headline as “7.0 MONSTER”. Wallace then worked for the Santa Cruz Sentinel for many years as a columnist, critic, and editor, winning awards locally and nationally for his writing. He has also served as a staff writer for the weekly Good Times and is now the City Life Correspondent for the news site Lookout Santa Cruz.

Wallace is the author of A Light in the Midst of Darkness, a cultural history of the independent bookseller Bookshop Santa Cruz. He is also the author of the novel Rhymes with Vain: Belabored Humor and Attempted Profundity, and the story collection, The Last Temptation of Lincoln. His work has been syndicated in newspapers nationwide, and his fiction has appeared in the Catamaran Literary Reader and the Chicago Quarterly Review. His play, “Oscar’s Wallpaper”, was adapted from one of the stories in The Last Temptation of Lincoln. His fiction was also included in the anthology, Santa Cruz Noir.