(The Iron and The Loom) 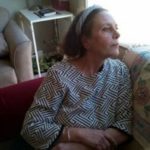 Flavia was born and raised in Arena, a medieval hill town in Calabria, the ancient "instep" of the Italian Peninsula, and studied Classics and European Literature at the University of Naples. She wrote her first short story when she was 12, and ever since then, writing has been the most important thing she does.

From a student of Creative Writing at SFSU she went on to become a teacher of Creative Writing, a most rewarding job where she met many young people with a true gift for writing. She was the recipient of the Emily Dickinson Award sponsored by the Poetry Society of America. She has taught Italian at the Italian Institute of Language and Culture in San Francisco and in several other schools throughout the Bay Area.

She has also worked for many years as a translator and consultant for the Italian Consulate General, specializing in Citizenship applications; another rewarding job where over her fourteen years she has helped hundreds of people of Italian descent reach their goal of reconnecting with the land of their ancestors. She lives in Pacifica, California, right at the edge of the ocean where the continent ends.

She can be found at Flavia's Voice.

Also Available From This Author