Join us on Saturday, January 21, 2023 at 10:00am PST/1:00pm EST for a Virtual Book Launch Celebration of Dangerous Inspiration by Greg Stone!

Synesthesia alters detective-turned-novelist Ronan Mezini’s perceptions. But can it help him find the killer?

Detective-turned-novelist Ronan Mezini has skewed perceptions because of a condition called synesthesia, which for him transforms sounds into colors. These visions give him unusual insights that help him solve the case. So when a collection of eccentric — and possibly violent — creative people come together at an elite artists' colony in rural Vermont, murders occur in rapid succession and suspicion falls on everyone as Mezini unearths the founding family's secrets. 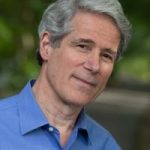 Greg began his career as a writer at Time Inc. in New York and later worked as a TV reporter in Minneapolis, Boston, and on PBS. He estimates that he has done 15,000 interviews, with people from every imaginable occupation or situation. Greg’s professional honors include three Emmy nominations.

Turning down an offer to anchor at CNN in New York, he founded Stone Communications, dedicated first to independent production and now to media consulting. Assignments have brought him all across the US, and to the UK, South Korea, Poland, and Albania.

Greg has written two business books on inspired management: Branding with Personal Stories: The Villains, Victims, and Heroes Model and Artful Business: 50 Lessons from Creative Geniuses. He is also co-authoring a third book called Defining Hybrid Heroes: The Leadership Spectrum from Scoundrel to Saint, under contract at Anthem Press.

Greg and his wife reside in Belmont, MA, just outside Boston. They have a daughter in medical school, a son who works in financial technology in New York, and a rescue dog who rarely barks.

IT'S 'MEET OUR AUTHORS MONDAY"!

IT'S "MEET OUR AUTHORS MONDAY"!

We are excited to announce that we have officially signed an agreement with author Gary Beck to publish his military action and adventure novel, "Call to Valor".
https://paperangelpress.com/paper-angel-press-welcomes-author-gray-beck/