Use code PRINT15 at checkout and save 15% and get free mail shipping or 50% off ground shipping when you buy printed editions of Paper Angel Press books on Lulu.com through Friday, July 3rd.

SAVE 25% ON PAPER ANGEL PRESS BOOKS!

Use code BLACKFRIDAY25 at checkout and save 25% when you buy printed editions of Paper Angel Press books on http://Lulu.com through Sunday, December 1st.

Have we mentioned that it also makes a great holiday party gift?

We are thrilled to announce the release of Back to the Land in Silicon Valley by Marlene Anne Bumgarner.

“We all worked together. Ate together. Sang together. Learned together. We had a good life. After living close to the natural cycles of the earth year after year, good and not good, we grew stronger and more resilient, learned to manage our occasional conflicts with tolerance and love.”

When Marlene Bumgarner and her husband moved to a rural plot of land in 1973, she thought of herself as simply a young mother seeking an affordable and safe place in which to raise her child.

By the time she left the land nearly a decade later, she had written two books and a weekly newspaper column, served as contributing editor to a national magazine, a college instructor, and a sought-after public speaker. Her natural food store, The Morgan Hill Trading Post, was the first one in her community.

Follow Marlene and her friends as they live on the land, coping with the challenges of rural life as Silicon Valley evolves into the high-tech center it is today, and the world in which they live transforms itself culturally, economically, and politically.

Back to the Land in Silicon Valley is available in hardcover, trade paperback, and digital editions. Signed editions are also available.

We are thrilled to announce the release of Love on Fire: Practicing Embodied Intimacy After Sexual Trauma by Leah RS Braun.

A practical guide through the grueling (but sublimely rewarding) recovery journey from sexual trauma, told through experience, strength, and hope.

Walk again with Leah RS Braun as she guides her readers through the swirling and often murky waters of recovery from sexual trauma.

Leah recounts what has worked for her in her journey as a survivor, as well as sharing the poignant stories of several other brave women who have traveled a similar path toward recovery.

This book is more than words you read; it’s actions you take.

If you want to feel better and even (gasp!) enjoy your sexuality, grow your intimacy skills, attain power and sovereignty in your own skin, and do it all without being hijacked by trauma memories, intrusive thoughts, or repeating destructive patterns you can’t seem to stop on your own, this book is for you.

Join Leah as she shares intimately about her set-backs and victories on the path to trauma recovery, and begin your own survivorship journey on the way. Leah holds your hand as you read the book and begin detailing your own commitment to make healing changes in your life. She also provides you with real-world, affordable recovery resources you can access wherever you are.

Now is the time to reclaim your sexual and intimate power and agency, and to know that you’ll change our rape culture — one survivor at a time — as you step into your own sexual trauma recovery story.

And, for a limited time, get the digital edition Leah’s first book, Sex on Fire: Finding Embodied Intimacy After Trauma for only 99¢!

We are thrilled to announce the immediate availability for the first time of Goddess Rising (Book Three of the “Goddess Rising” Trilogy) by Jay Hartlove.

The nascent goddess Desiree meets the Egyptian archangel Joseph while ghost-busting the myth of Saint Patrick.

Aided by her psychiatrist, Sanantha Mauwad, Desiree discovers she is a pawn in a revenge quest that Isis has been planning for thousands of years.

Once again, gods and demons war on Earth with our heroes fighting not just for survival — but justice.

And, for a limited time, get the digital editions of the first two books in the trilogy, Goddess Chosen and Goddess Daughter for only 99¢!

We are pleased to announce the immediate availability of Grimaulkin Collected by L. A. Jacob.

Mike LeBonte went to prison for summoning demons and using magic. At the age of 18, he is let out for good behavior. Now he’s trying to make a better life for himself.

He’s trying to stay out of trouble. However, trouble finds him, because someone has summoned a demon in a local park, and he is called in to assist the police in figuring out who did it — that is, if he didn’t do it himself.

At the same time, he is attempting to make inroads with a handsome young man in the city, the owner of a New Age store in downtown. Mike also assists his cousin who is being stalked by someone—or a group — while fighting off his new boyfriend’s ex.

And when you think it’s over, someone has summoned Lucifer. But with the help of modern chemistry, Mike doesn’t have magic anymore.

This is just a few of the adventures that befall Mike, also known by his prison name: Grimaulkin.

We are pleased to announce the availability of the audio edition of Beguiling Voices, the third book in the Glass Bottles series, by J Dark.

Never trust magic … or the people that hire you.

Fern Fatelli dives back into her job as a ‘trapper’, and is hired to kidnap a girl away from an abusive household — only to find that she’s delivered the child into a far greater danger than she could have ever imagined.

Narrated by Marie Kopan, the audio edition of Beguiling Voices (Book Three of the Glass Bottles Series) is available on Audible, Amazon, and iTunes.

We are very pleased to announce the immediate availability of the audio edition of Goddess Daughter (Book Two of the Goddess Rising Trilogy) by Jay Hartlove.

How far can you genetically alter someone before she becomes someone else … before she loses her soul?

A breakthrough in human cloning leads to unspeakable evil.

Psychiatrist Sanantha Mauwad is back, helping a world leading geneticist recover a four-month memory gap in which his wife was killed and his daughter was left in a coma. But, as she unravels the mystery, she finds nothing and no one are as they appear.

Cutting-edge science and ancient cults collide in this tale of too much power driven by too much passion.

Narrated by Trevor Wilson, the audio edition of Goddess Daughter (Book Two of the Goddess Rising Trilogy) is available on Audible, Amazon, and iTunes.

We are extremely pleased to announce the immediate availability of All That Was Asked by our new author Vanessa MacLaren-Wray.

It was supposed to be an easy jaunt to observe the stick-like aliens of Deep Valley Universe.

But Ansegwe — perpetual student, aspiring poet, and scion of the (allegedly criminal) Varayla Syndicate — well, he just has to ruin everything. As everyone knows, Ansegwe may have sensibility, but he’s not long on sense.

When a weird, twitchy little creature attaches itself to him, Ansegwe violates every protocol in the handbook to save its life. Finding himself in all kinds of trouble, Ansegwe needs to make some serious life changes, starting with that complicated family of his.

Ansegwe may just have to grow up … now that he’s adopted an alien.

All That Was Asked is available in hardcover, trade paperback, and digital editions. Signed editions are also available. 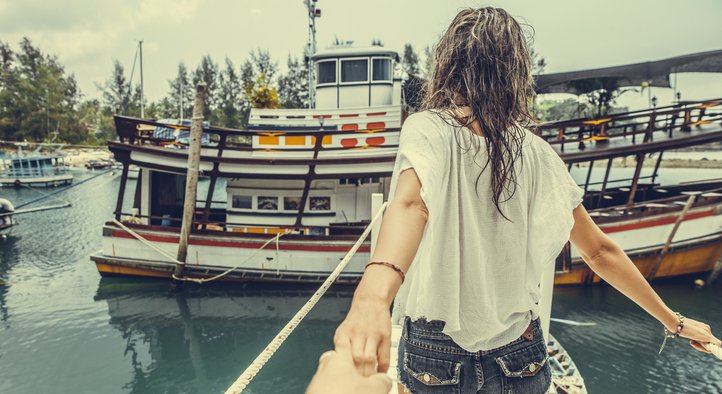 Life at sea presents many challenges, and finding (and keeping) love is one of the biggest. Heartwreck: Romantic Disasters at Sea is a collection of true and semi-true stories about love gone wrong on the high seas, curated by Melanie Neale, Emily Greenberg, and Laureen Hudson, and published under our Unruly Voices imprint.

Rough weather, small spaces, long days in the boatyard, and an eclectic mix of personalities make personal relationships among the seafaring community challenging and rife with struggles. We’re looking for personal essays and memoir/creative nonfiction pieces about your experiences. Be real, be honest, be funny, be brave. Maybe a relationship fell apart and you got stuck with a boat you didn’t think you wanted. Maybe, after five days at sea with a partner and five months to go, you realized you can’t possibly live with that person on a small boat. Whatever the disaster, if it happened on or around boats, we want to read about it.

SUBMISSIONS ARE NOW CLOSED. Heartwreck: Romantic Disasters at Sea will be available for purchase in October 2020.

We are seeking submissions for this anthology. Our targeted release date is October 2020. Please carefully read the submission guidelines, as we will only consider submissions that follow the guidelines.

You can find our general submission guidelines on our Submissions page.

Please submit your complete story in standard manuscript form in digital format (DOCX, RTF, or ODT) to submissions (at) unrulyvoices.com. (If you want bonus points, also attach a MOBI file; that will help our editorial team be able to read it faster.)

Please include “Heartwreck Anthology” in the subject line of your submission.

Include the following in your cover letter/email:

Check this page for the latest information about the Call for Submissions for this anthology.

We are excited to announce the immediate availability of the audio edition of Sometimes After Dark, an anthology of short stories, by J Dark.

Among the tales in this collection to make you think, question, and wonder …

Explore the past, future, and triumphs of the human soul.

Narrated by Jeffrey A. Hering, the audio edition of Sometimes After Dark is available on Audible, Amazon, and iTunes.

We are thrilled to announce the immediate availability of Goddess Daughter (Book Two of the Goddess Rising Trilogy) by Jay Hartlove.

How far can you genetically alter someone before she becomes someone else … before she loses her soul?

A breakthrough in human cloning leads to unspeakable evil.

Psychiatrist Sanantha Mauwad is back, helping a world leading geneticist recover a four-month memory gap in which his wife was killed and his daughter was left in a coma. But, as she unravels the mystery, she finds nothing and no one are as they appear.

Cutting-edge science and ancient cults collide in this tale of too much power driven by too much passion.